I didn’t feel as if I was welcomed in this my new school. Several people who had graduated from reputable secondary schools and were really smart.

Here I was, a graduate of a model college somewhere in the bush. When my parents told me I was going to come to this school, I had mixed emotions. I was really worried how I would cope with several rich people and here I am with little close to nothing.

On resuming school, I resolved that I was going to be to myself so as to avoid undue pressure and me thinking on why God was unfair making me not as rich as these ones. Some of my clothes were gotten from catagura market and I could count the number of clothes I had even at that. Even with my being on my own, there were times I engaged in various conversations and I would just become sad and then engrossed with so much self-pity.

Fast-forward to the second semester, I had issues with my registration portal which I had to rectify. On getting there, I met a girl in my class and we exchanged greetings and then she made a statement I would not forget so fast. She said ‘you don’t even look like someone that went on break’. I had a lot of interpretations to that statement, which diminished my self-esteem. I told my sister later on and the next break, we had to work on me looking fresh for the semester.

Fast forward to my second year, I was using a tecno phone with a nokia battery with papers to patch it up. That was a trying time for me. When people yabbed me about it, I would laugh along with them but at the corner of my bed I blamed God as to why my life was like that. I kept hoping for better things to change but nothing was forth coming.

In my five years in school, I had signature hairstyles because I was being economical with my pocket money and trust people to make comment on that too. I can’t do synthetics and so braids and faux locs were my escape.

Funny how, I would not play victim in this because there are times I would be among the group of people that will laugh at other people’s insecurities. Looking back I understand what those ‘jokes’ caused me. I am very specific on the kind of jokes to make with people.

Lesson: be careful of the words that comes out of your mouth especially those you think are jokes. You just might be hurting someone. 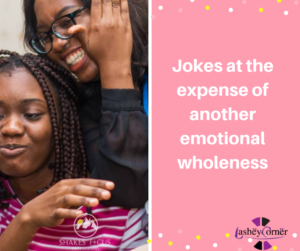